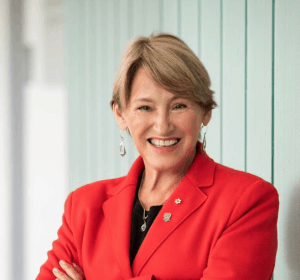 Board Director; President and Vice-Chancellor of McGill University

Suzanne Fortier has served as Principal and Vice-Chancellor of McGill University since September 2013. Prior to her appointment as Principal, Professor Fortier was President of the Natural Sciences and Engineering Research Council of Canada (NSERC) from 2006 to 2013. She held the position of Vice-Principal (Academic) from 2000 to 2005 and Vice-Principal (Research) from 1995 to 2000 at Queen’s University in Kingston, Ontario, where she was a Professor in the Department of Chemistry and in the School of Computing (1982-2006). A native of St-Timothée, Québec, Professor Fortier graduated from McGill with a BSc (1972) and a PhD in Crystallography (1976).

In 2016 Professor Fortier was appointed to the Canadian Federal Minister of Finance’s Advisory Council on Economic Growth and in 2017 was appointed Vice-Chair of the World Economic Forum’s Global University Leaders Forum (GULF). She also serves on the Canadian Business-Higher Education Roundtable, the Board of Directors of Montreal International, the Conference Board of Canada, the Pierre Elliott Trudeau Foundation, and the Catalyst Canada Advisory Board. She is a Member of the Executive of the Board of Directors of the Bureau de coopération interuniversitaire (BCI) and is an Academic Member of the Board of Governors of the Technion Israel Institute of Technology.

Professor Fortier was appointed an Officer of the Order of Canada in 2018. She holds honorary doctorates from Thompson Rivers University, Carleton University, and the University of Glasgow and is an officer of France’s National Order of Merit, a fellow of the American Association for the Advancement of Science, and was named a Specially Elected Fellow of the Royal Society of Canada (2015).